Growing their own food teaches students more about healthy lifestyles 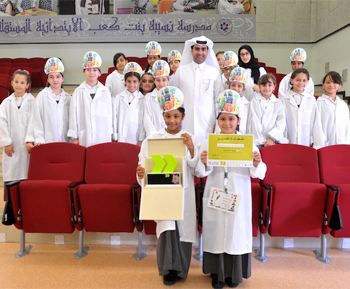 Growing their own food teaches students more about healthy lifestyles

A harvest of fresh fruit, vegetables and salad plants has helped teach green-fingered students more about the benefits of eating healthily in Weill Cornell Medical College in Qatar’s Greenhouse Initiative.

The initiative was part of WCMC-Q’s Sahtak Awalan – Your Health First campaign and saw greenhouses, plant pots, seeds and compost given to 16 primary schools across Doha. The students at the schools were then challenged to grow the best produce they could. The aim was to teach children about fresh, healthy food and to encourage them to eat more fruit and vegetables.

The judging has now been done and the pupils of Nosaiba Bint Kaab Girls Primary were found to have grown the best crops. Students at Safiya bint Abdul Muttalib School, and Al Quds Model Independent School for Boys were second and third respectively.

But the girls of Nosaiba Bint Kaab came out on top with all their plants providing a bumper harvest. They even managed to get three crops out of some of the plants like parsley, coriander and arugula as well as getting lots of helpings of tomatoes, peppers, and eggplants.

Nesreen Al-Rifai, Director of the Department of Government and Public Affairs at WCMC-Q, said the top three schools had done extremely well but that the most important thing was that everyone who had taken part had learned more about the importance of eating fresh, healthy food.

Mrs Al-Rifai said: “Our health is one of the most valuable gifts we have and we need to take care of it. A health survey in 2012 showed that more than 90 per cent of people in Qatar do not eat the recommended daily amount of fruit and vegetables. The Your Health First campaign, along with the Greenhouse Initiative, aims to change that. We wanted to teach young children the importance of eating fresh, healthy food. By learning good habits when young they are more likely to continue with them as they grow older.”

In all, the children were provided with seeds and growing instructions for parsley, coriander, arugula, onions, radishes, tomatoes, eggplants, peppers, and cucumbers. All the schools that benefited were nominated by the Supreme Education Council (SEC).

Jaber Alshawi, Assistant Director of Communications at the SEC, said: “We are very pleased to work with all partners in “Your Health First” campaign and will continue to support all its initiatives. We met today for the Greenhouse Initiative, which aimed to encourage school students to grow and eat healthy foods. We will evaluate this experience with all partners and we will prepare for the next steps, taking into consideration the interests of the students and the community alike.”

The top three schools have now all received trophies to mark their achievement.

Asmaa Azzam, science coordinator at Nosaiba Bint Kaab Girls Primary said the Greenhouse Initiative had been a great educational tool for the children.

She said: “It connected the curriculum to the work that we do and made the children more confident – it allowed them to do something that is big and real. It also helped them connect to the environment as more and more technology like iPads is postponing that.”

Mrs Azzam added that growing their own healthy food also had an impact.

She said: “We teach them all the time to eat healthily and keep away from junk food but when they planted the vegetables themselves they became more aware of what they should and shouldn’t eat.”

She added that the administration of the school had helped make the project a great success.

Haya Buassoum aged 10, was one of the Nosaiba Bint Kaab Girls Primary students who took part. She said it had been great fun and they had learned a lot.

She said: “I planted an eggplant and it was the first time that I had grown vegetables. We learned about how to look after the plants and to keep Qatar ‘green’. I also learned to eat healthier food like cucumbers and tomatoes but to avoid hamburgers and chips.”

Sahtak Awalan – Your Health First was launched in 2012 in association with the Supreme Council of Health and in strategic partnership with Qatar Foundation, the Supreme Education Council, Qatar Petroleum, ExxonMobil Qatar Inc., Oxy Qatar, Qatar Olympic Committee and Vodafone Qatar. The five-year campaign aims to educate the whole population about how to improve their health, so helping the nation meet the targets of Qatar National Vision 2030.