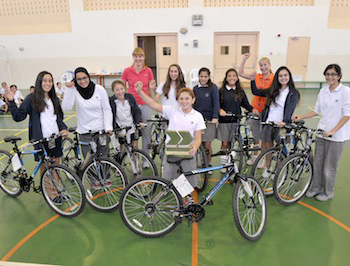 Mountain bikes have been awarded to the middle school students who won this year’s edition of The Challenge.

The Challenge is an interschool competition organized by WCMC-Q as part of its flagship health campaign, Sahtak Awalan – Your Health First.

Teams of ten students from more than 20 schools across Qatar competed in the contest in separate categories for boys and girls, taking part in a series of fun, physical games in an effort to win the Challenge Trophy. Held at the Aspire Zone in March, the boys’ contest was won by a team from the German School Doha, while the girls’ event was won by International School of Choueifat for the second year running.

Each member of both winning teams was awarded a mountain bike in keeping with the aims of the Your Health First campaign, which is to encourage everyone in Qatar to take part in regular physical activity. This is in line with the wider aims of Your Health First to help create a healthy nation able to contribute to the country’s emerging knowledge-based society in accordance with the goals of Qatar National Vision 2030.

Lina Al Haj, aged 12, team captain of the girls’ team of International School of Choueifat, said: “It is really nice to have won. I think we managed to win because everyone worked hard for the team. I think it’s good that we got to do something fun together that involved exercise instead of playing computer games or watching TV.”

German School Doha student Ghalibe Khayal, aged 13, said: “I think our team won because we play football almost every day at school so we are all quite fit. It was great to be involved in the competition because we got to meet students from other schools.”

Physical education teacher Delia Marian of International School of Choueifat said: “The students have been really energized by The Challenge and they all want to be in the team for next year’s event. We are going to organize our own competitions at the school to decide who gets to be on the team at the main event so it is becoming part of our school culture here at Choueifat – the students love it.”

The Challenge was first held in 2013 and has now become an annual event and a highlight of the scholastic calendar. It is organized through the Your Health First campaign, a five-year initiative which is run in association with the Supreme Council of Health and in partnership with Qatar Foundation, the Supreme Education Council, Qatar Petroleum, Oxy Qatar, ExxonMobil Inc., Qatar Olympic Committee and Vodafone.