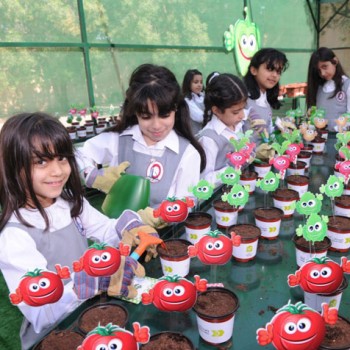 A groundbreaking initiative designed to teach children about the benefit of growing and eating healthy food has been launched by the Sahtak Awalan – Your Health First campaign.

The greenhouse initiative is part of the Sahtak Awalan campaign, which was introduced by Weill Cornell Medical College in Qatar (WCMC-Q) and the Supreme Council of Health to encourage people to think about adopting a healthy lifestyle. Elementary schools from across Qatar were selected by the Supreme Education Council to be part of the scheme and all these schools will receive a greenhouse from the Sahtak Awalan campaign. In addition they will be presented with gardening equipment and a variety of vegetable and herb seeds. The children will be given advice on how to grow the seeds and they can then watch the plants from germination through to when the vegetables develop.

The children will then be able to take the produce they have grown home and eat the freshest, healthiest food there can be with a competition held at the end of the growing season to determine which greenhouse had the best crop. The scheme will be expanded in coming years to include more schools. His Excellency Mr. Abdulla Bin Khalid Al-Qahtani, Minister of Public Health, confirmed that the building of greenhouses in elementary schools in Qatar will be of great help to the Supreme Council of Health and its ongoing efforts to raise awareness of health among the young, especially in the area of healthy eating.

He praised the fruitful cooperation between the Supreme Council of Health, the Supreme Education Council, Weill Cornell Medical College in Qatar, and other parties that have supported the initiative.

His Excellency said that the Your Health First campaign, through which the project was developed, serves the National Health Strategy 2011-2016, because raising awareness in people and encouraging them to follow a healthy lifestyle is a huge challenge that requires the combined efforts of everyone involved in it. The campaign is seen as very significant in that respect. His Excellency pointed out that the spread of unhealthy eating habits has exacerbated health problems and has led to chronic diseases such as obesity and diabetes, as well as cardiovascular diseases and some types of cancer, occurring at an early age. Health surveys undertaken in Qatar in 2012 showed that 41% of citizens suffer from obesity and 91.1% do not eat the recommended daily allowance of five fruit and vegetables as stated by the World Health Organization. Improving this requires a new strategy to consolidate the efforts in order to create a healthy society. His Excellency clarified that the Supreme Council of Health has adopted many projects and programs that aim to change unhealthy habits and behaviors. These programs are part of the National Working Plan for Nutrition and Physical Exercise (2011-2016), which aims to reduce the prevalence of chronic diseases and the mortality rates associated with them in accordance with the goals of the National Health Strategy, one facet of which is Preventative Healthcare. The National Health Strategy also aims to establish a comprehensive program for nutrition and physical exercise with initiatives that target all groups that would benefit so it would ultimately have an effect on the prevalence of obesity’.

His Excellency emphasized that the council is keen to consolidate cooperation with all governmental and non-governmental institutions as they play a vital role in promoting the need to adopt healthy lifestyles that will contribute in creating a healthy, strong and productive society. The greenhouse initiative was launched at Al Bayan Preparatory School for Girls by WCMC-Q and the college’s strategic partners: Qatar Foundation, the Supreme Education Council, Qatar Petroleum, ExxonMobil Qatar Inc., Occidental Petroleum of Qatar, Qatar Olympic Committee and Vodafone Qatar.

As the children began planting their seeds in the pots there was excitement and lots of chatter about how large the plants would grow and how much fruit and vegetables would be harvested. The girls were told how to take care of the plants and were helped by the representatives of all the organizations involved in the scheme.

His Excellency Dr. Mohammed bin Saleh Al-Sada the Minister of Energy and Industry, and Chairman and Managing Director of Qatar Petroleum, praised Sahtak Awalan as an important initiative towards a healthier new generation.

He said: “Teaching healthy eating habits is vital to building stronger and healthier bodies and minds for a whole new generation of children surrounded by junk food.

“We hope that by combining education and a fun experience, Sahtak Awalan will help children take their first steps towards healthier living.”

Dr. Javaid Sheikh, Dean of WCMC-Q, said it was vitally important that young people are educated about making healthy choices when it comes to what they eat.

Dr. Sheikh said: “So many diseases that affect society today could be prevented if people adopted a healthy diet. With the greenhouse initiative we want to make sure that our children know from an early age the foods that they should be eating. We all hope that this knowledge will mean that our young people grow up fit and healthy and that diseases like obesity and diabetes become diseases of history.

“Education, however, should also be pleasurable. Lessons learned while having fun are lessons that will stay with children throughout their lives. For this reason we also wanted the greenhouse initiative to be enjoyable and judging by the reaction of the children at the launch, it will be a great success.”

His Excellency Sheikh Saoud bin Abdulrahman Al Thani, Secretary General of the Qatar Olympic Committee (QOC), expressed his happiness for the practical steps taken in the frame of the Sahtak Awalan – Your Health First campaign, and in particular, the launching of the first greenhouse within the project. H.E reiterated the crucial role that sport plays in raising the health level for all community members, as part of the combined efforts exerted by the various state authorities and public and private institutions to adopt a healthy lifestyle.

In this regard, HE QOC Secretary General said: “The QOC was keen to enter into a strategic partnership with Weill Cornell Medical College in Qatar so that both institutions coordinate their efforts towards laying a solid foundation for building a healthy society in line with of the Qatar National Vision 2030 where human development represents one of the most important pillars aimed at raising a healthy generation than can actively contribute to building a prosperous future for the State of Qatar. H.E added: “The sports sector strategy 2011-2016 aims to raise the level of participation in sports and physical activities, thus meeting the objectives of the Sahtak Awalan – Your Health First campaign. ” Engineer Saad Al Muhannadi, President of Qatar Foundation, highlighted the significance of starting the education process early and involving children in the practice of growing healthy food, in order to build a strong foundation for healthy living in the mindset of future generations.

Engineer Al Muhannadi said: “At Qatar Foundation, we endeavor to provide all our youth with a lifelong education that will help them grow into healthy and productive adults, since this approach will positively impact their well-being for many years to come. By engaging children in the process of growing nutritious food and learning about it from an early age, we can instil a much deeper understanding of what constitutes healthy eating habits and encourage them to develop an appreciation for nature and healthy living.”

Mr. Steve Kelly, President and General Manager of Oxy Qatar, said: “Oxy Qatar has been a proud supporter of the Your Health First campaign since its inception, and we are enthusiastic about this latest development in the program. As part of our commitment to the community, we want to help promote healthy lifestyles where change can be the most effective and enduring – among young people. The Greenhouse Initiative has the potential to make a real difference in young people’s lives by teaching them about food choices through a fun and exciting challenge.”

“ExxonMobil continues to promote the importance of healthy lifestyles in Qatar through its support of the Your Health First initiative,” he said. “This nationwide program aims to increase the public’s awareness of critical health issues and educate the local community about preventive measures, including lifestyle changes, and we are pleased to be a part of this effort. ExxonMobil Qatar strongly encourages its own employees to participate in events that promote healthy lifestyles, and our community is very enthusiastic about being part of this year’s activities.”

Mohammed Al Yami, Director of External Affairs at Vodafone Qatar, said: “The greenhouse project is a truly commendable initiative which will certainly help to nurture our children’s understanding of the importance of leading a healthy life starting at a very young age. It also helps them become role models for their peers. Enhancing and investing in our youth’s education is strongly in line with what we, at Vodafone Qatar, continuously strive to support and grow. Therefore, we are very happy to partner with WCMC-Q to see such initiatives materialize with a tangible benefit to the community.”