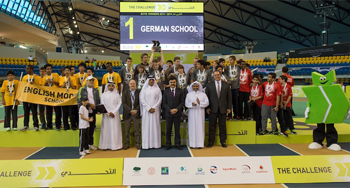 The Challenge: A Day of Exercise, Education and Enjoyment

The Challenge was part of WCMC-Q’s Sahtak Awalan: Your Health First campaign, which was launched in June 2012 and aims to interact with Qatar’s community and inspire them to lead healthy lives.

The participating schools, which were selected by the Supreme Education Council, each fielded a team of ten students who then participated in a series of fun and educational games in front of an audience of their friends, families and high-profile guests. The students also held an exhibition in which posters they had created on the theme of healthy eating were displayed. Topics included smoking, healthy eating and road safety.

In all, nearly 200 posters were on display at the exhibition and were judged by members of WCMC-Q’s faculty and the Supreme Council of Health. Hamada Al Sayed Ghazi, of Hamza Bin Abdul Muttalib School, was awarded first place and an iPad for his poster on the dangers of smoking. Dana Hassan Badar, of Al Bayan Girls Preparatory School, came second and Jihad Al Idrissi, of English Modern School, third. They both received iPad Minis.

The goal of The Challenge was to inspire young people and their families to embrace the opportunity to learn more about living a healthy lifestyle, so building a strong and healthy future generation.

H.E Abdullah bin Khalid Al-Qahtani, Minister of Public Health and Secretary General of the Supreme Council of Health (SCH), said that the SCH has fully and actively supported the Your Health First (YHF) awareness campaign since it was launched in June 2012 as it significantly contributes to achieving Qatar’s National Health Strategy (NHS) 2011-2016, which aims to enhance the wellness of the people of Qatar and includes amongst its several goals healthy lifestyles.

“The five-year YHF campaign primarily aims to educate both the Qatari and expatriate communities about healthy lifestyles, especially among the generation of the future. The Challenge, WCMC-Q’s health and sports contest for schools, basically aims to encourage school children and youth to opt for healthy lifestyles, and this is extremely important for the sustainable development of this nation” H.E. added.

H.E. also applauded the partnership and cooperation between private and public sectors in Qatar, as embodied in the YHF initiative for the benefit of the community.

“We are confident that the well-rounded YHF campaign will eventually contribute to promoting health awareness among Qataris and expatriates, in line with the SCH’s strategy to build a healthy and well-educated generation that advances sustainable development in Qatar, in keeping with Qatar National Vision 2030 which rests on several pillars, one of which is the pursuit of human development for a sustainable, prosperous society,” H.E. concluded.

Dr. Javaid Sheikh, Dean of WCMC-Q, said: “This has truly been an inspiring event. The Challenge has always been about educating our young people and their families about the facts pertaining to a healthy lifestyle, but doing so in an enjoyable way. Today there has been lots of laughter, lots of fun and lots of exercise but I believe that every one of the students taking part has also learned a little more about the importance of staying healthy. I hope very much that this message will spread across Qatar so we can help create a healthy population able to contribute in the future to a knowledge-based economy.

“I would also like to take this opportunity to thank all of our strategic partners. From the very outset they have shown huge faith in the Sahtak Awalan campaign and their support and contributions have been invaluable to its success.”

“The Challenge is truly an innovative component of the Your Health First campaign as the event instills in all participating students the importance of living a healthy lifestyle. Qatar Petroleum congratulates all winning students and their schools and we look forward to the participation more schools and students in Qatar in future editions of The Challenge,” said Mr. Abdulrahman Abdulla Al-Obaidly, Acting Manager for Public Relations and Communications of Qatar Petroleum.

Stephen A. Kelly, President and General Manager of Oxy Qatar said, “Promoting healthy lifestyles is a company priority for Oxy Qatar, and one that we are particularly proud to support through the Sahtak Awalan campaign.  The Challenge exemplified this joint commitment by providing a fun and interactive environment where students and their families could learn about healthy lifestyle choices.  Promoting a positive association with physical fitness and healthy nutrition is critical to maintaining a healthy future for Qatar.”

“Helping children learn and develop healthy lifestyle habits is an important social issue,” said Bart Cahir, President and General Manager of ExxonMobil Qatar Inc. “ExxonMobil is proud to work with the Supreme Education Council and Weill Cornell Medical College in Qatar to help ensure these young people grow into healthy, strong, and capable adults who will lead the country’s growth far into the future.”

“Today has been a truly enjoyable day. It is great to see how enthusiastic and dedicated the youth of today’s society are in promoting a healthy lifestyle among friends and family. Vodafone is proud to be part of such a great initiative with WCMC-Q that enhances the quality of life of everyone in Qatar.’’ Said Mohamed Al-Sadah, Chief Administration Officer at Vodafone Qatar.

The Challenge was held at the Aspire Dome with the invaluable help of Aspire Zone Foundation. The physical fitness event saw lots of competitive action as the teams raced against each other in a series of activities. Many of these involved dressing up in costumes that are related to science and healthy lifestyles.

The eventual winners in the boys’ event were AbuBakr Assedeeq Preparatory School while International School of Choueifat were crowned champions in the girls’ class. Each member of the winning teams received iPad minis courtesy of Vodafone Qatar who provided all the prizes for The Challenge.

Dana Inaty, of the International School of Chouiefat, said: “In the rehearsals we didn’t think we were going to win but we always had our hopes up and in the end we came as a team and won as a team.”

Ahmad Rimi and Nabil Kordy, the coaches for AbuBakr Assedeeq Preparatory School, said: “It was a very exciting day and we hope it will be the same next year. Everything has been wonderful and all of our students played really well to take first place.”

Members of the winning teams received medals while all participants received a certificate of appreciation. As well as the activities on the field, there were various high-tech attractions for the audience during the intervals. Parents and other spectators were able to test their own fitness with equipment able to show them how fast they can run or how far they can kick a football. The aim was to encourage them to take measures to improve their lifestyles.

The Challenge will now become an annual event in Qatar’s academic calendar and next year it is expected that even more schools will participate. Click here to view the event’s photo album.

The Your Health First campaign aims to educate both the Qatari and expatriate communities so that they can make informed, healthy, lifestyle choices. The goal is to help create a healthy population able to contribute to Qatar’s knowledge-based society in line with the objectives of Qatar National Vision 2030.