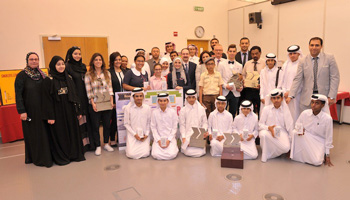 The ten winners have been announced in an innovative annual competition to encourage young people to think about their health.

The Challenge Poster Competition is now in its third year and is organized by WCMC-Q as part of its Sahtak Awalan: Your Health First campaign. As well as promoting good health, the competition also aims to inspire students to become the doctors and scientists of the future.

Dr. Javaid Sheikh, dean of WCMC-Q, said the standard of the competition had been very high.

Dr. Sheikh said: “The judges were very impressed with the academic work that all of the students had put in to their posters.

“Health is one of the most valuable gifts that we have and it is so important that we take the time to make a conscious effort to live healthy lives, not just for our sakes but also the sakes of our families and friends. The Your Health First campaign encourages people to do just that – think about their health and then make the right choices.”

Each school was awarded a trophy while every student received an individual prize presented by Dr. Marco Ameduri, WCMC-Q’s associate dean for pre-medical education.

Topics chosen by the students included obesity, car accidents and nutrition. Some of the students will now be chosen as ambassadors for the Your Health First campaign, promoting healthy lifestyle choices to others.

Sixteen-year-olds Saeed Al-Merri and Mohammed Al-Marghi, from the Audio Education Complex, chose smoking as their topic, creating a 3D poster that used models of cigarettes as a funeral pyre.

“Smoking has a negative effect on health,” they explained, “but before our research we didn’t know that smoking can affect the heart and can discolor the eyes.

Art teacher Nourelhadi Osman said that the poster competition had been a valuable educational tool and had come at the right time as it coincided with National Stop Smoking Week so Saeed and Mohammed took their message to the rest of the school.

The students then joined a discussion led by Nesreen Al-Rifai, WCMC-Q’s chief communications officer, in which they explained their posters and their reasons for choosing their particular topic.

Qatar Leadership Academy cadet Mohammed Al-Fadli, 13, chose sunlight as the topic of his poster. He said: “If you get too much sunlight you can get burnt but if you don’t get enough your body won’t make enough vitamin D, so you have to be careful and make sure you get just the right amount.”

Mohammed Saeed of Ossama Bin Zaid Independent School worked with a group of friends to create a poster about obesity.

He said: “We chose obesity because it’s a major issue for Qatar that affects a lot of people here. The problem is that people are eating too much fast food and not enough people have an exercise program that they follow. But we say in the poster that the most important thing is to have the self-motivation to eat healthy food and to exercise regularly.”