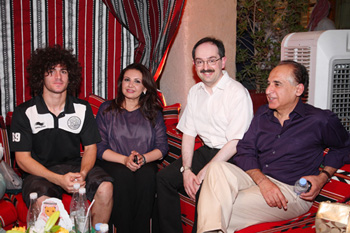 WCMC-Q held the first public event of its new national health campaign: Sahtak Awalan – Your Health First – with the help of a Qatari football star and a comedian.

Tents were set up at a busy Souq Waqif and Qatari standup comedian Mohamed Kamal played host. Using humor to attract the audience, he highlighted public health issues and encouraged them to join in a competition focusing on healthy lifestyles with prizes provided by Vodafone, the campaign’s official communications partner.

Members of the public, especially football fans, also enjoyed the company of Al Sadd Football Club player Omar Yahya Rabah, with visitors able to ask him about fitness, diet and further advice he could give to them to stay fit.

Sahtak Awalan – Your Health First, which is being run in association with the Supreme Council of Health, was officially launched in June but the event at Souq Waqif was the first chance that nationals and expatriates had to actively engage with it. Representatives from the campaign’s strategic partners – Qatar Petroleum, Exxon Mobil, Occidental Petroleum of Qatar and Vodafone Qatar – joined the crowds.

Dr. Javaid Sheikh, Dean of WCMC-Q, hailed the wide participation of the general public in the campaign’s event.

“I would like to express my gratitude to the Supreme Council of Health and our strategic partners in the ‘Your Health First’ campaign for their strong support of the program since its outset,” said Dr. Sheikh. “Established in partnership with Qatar Foundation for Education, Science and Community Development, Weill Cornell Medical College in Qatar pledges to be a center of excellence in education, biomedical research and clinical training. Today, we seek to implement the quality healthcare concept through this campaign to improve health awareness among the Qatari society.”

The event was also attended by Qatari journalist and critic Dr. Hassan Rasheed, who praised WCMC-Q for the campaign and thanked the college for its initiative.

Dr. Rasheed added: “Such events create direct interaction and refresh the memory with the risk of neglecting the health.”

By organizing activities like the Souq Waqif event – which included something of interest for every member of the Qatar community – WCMC-Q aims to spread health awareness and an understanding of how to prevent various diseases.

The Your Health First campaign is a five-year initiative, timed to conclude with the completion of the National Health Strategy in 2016. It comprises several stages, the first of which is based on introducing Qataris to issues related to public health, particularly healthy practices and the importance of physical activity and diet. Subsequent stages will address a number of health and medical issues such as diabetes and cardiovascular disease, osteoporosis, mental health and the health of women and children, bone diseases, rheumatism, anxiety, sleep disorders, as well as the benefits of vitamins, cancer, and healthy eating habits by children, young people and adults.

WCMC-Q has also produced a TV health awareness program for the campaign, which is being aired on Qatar Television at 1pm every day during Ramadan, as well as daily health tips via Qatar Radio and Sout Al Khaleej. Using such a diverse range of media technology, including social networks, will ensure the campaign reaches the largest possible audience, but especially the 10-25 year age group.

For more information visit the campaign’s Facebook page at: www.facebook.com/SahtakAwalan