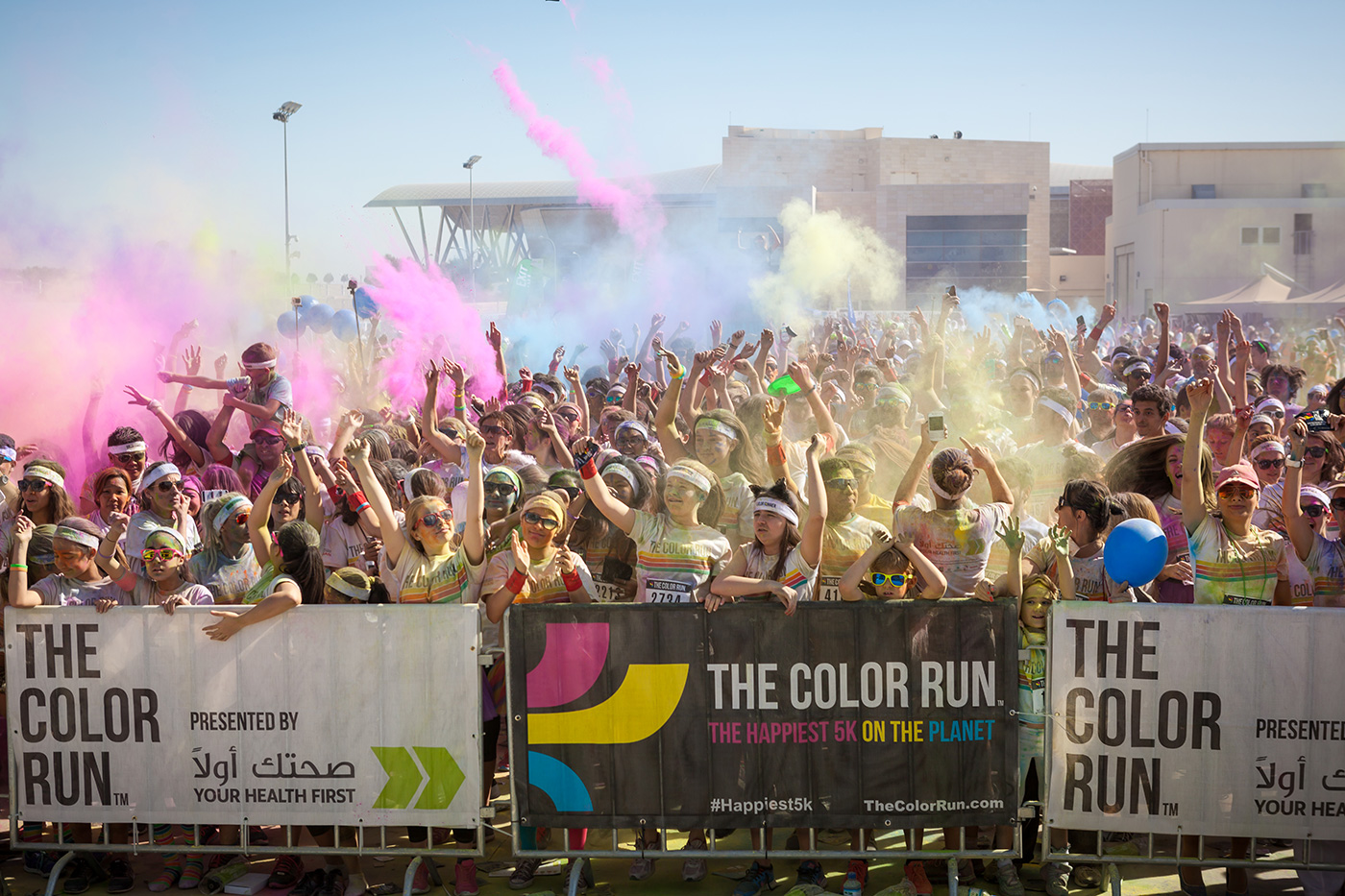 ‘Happiest 5k on the Planet’ sees 5,000 Color Runners enjoy a morning of color, happiness and health with Sahtak Awalan: Your Health First.

The Color Run™, the original 5-kilometre color powder race, enjoyed a huge turnout in its Doha debut on Saturday at the Qatar National Convention Centre. With the help of Sahtak Awalan: Your Health First – the health campaign run by Weill Cornell Medicine-Qatar, the Happiest 5k on the Planet saw participants of all ages and abilities enjoy a unique way to stay healthy and have some fun along the way.

Following a warm up from Reebok’s internationally famed ‘Les Mills™’ Master Trainers, Color Runners dressed in pristine white were led across the starting line by a color-splattered Nissan X-Trail before running, walking and dancing their way around the 5k color extravaganza. More than 180 volunteers were on hand to shower participants in vibrant colored powder at one-kilometre intervals around the course.

After completing the course, Color Runners made their way to the Finish Festival where the celebrations continued with massive color throws, stage performances and live music.

Color Runner Kate Inwood said: “The reason I chose The Color Run was because it was fun! I am recovering from heart problems and I needed to pay more attention to my health and this was the perfect start. The Color Run is open to everyone and the fact that it is an untimed race meant there was no pressure!”

The Color RunTM Qatar is presented by Sahtak Awalan: Your Health First, an initiative of Weill Cornell Medicine-Qatar in association with the Supreme Council of Health and the campaign’s strategic partners, Qatar Foundation, Supreme Education Council, Qatar Petroleum, Occidental Petroleum Qatar, ExxonMobil, and Qatar Olympic Committee. The five-year educational health campaign, which was launched in 2012, is aimed at all age groups but has a special focuses on encouraging young people between the ages of 10 and 25 to make healthy lifestyle choices.

Nesreen M. Al-Rifai, Chief Communications Officer for Weill Cornell Medicine-Qatar, said: “It is fantastic to see so many people take part in The Color Run. This is the first event of its kind in Doha and the response has been overwhelmingly positive. Everyone had such a great time whilst getting active and healthy and for Sahtak Awalan: Your Health First, that is what this event is all about – making a healthy lifestyle fun and accessible.”

Exploding in popularity since its launch in January 2012, The Color Run™ has become the single largest event series in the United States and is gaining traction around the world with over 100 events and one million participants in 2013 alone.

In keeping with the event’s community focus, $1 from every entry at the Color Run™ was donated to Educate a Child. Launched in November 2012, by Her Highness Sheikha Moza bint Nasser, Educate A Child (EAC) is a global program of the Education Above All Foundation (EAA) that aims to significantly reduce the number of children worldwide who are denied their right to education.